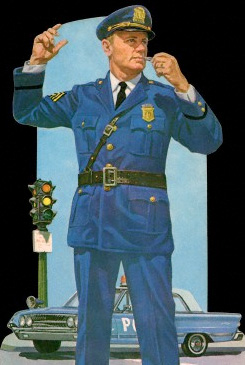 It was a busy high way that connects all major roads in the city. People rush in their vehicles and it leads to chaos in the busy road. Driving the vehicles beyond the speed limit became the major problem in the city. A police officer decided to watch for the vehicles that are driven beyond the speed limit. He found a perfect place to hide himself to watch for the rash driving vehicles.

Very surprisingly, one day, the police officer was very surprised that everyone who drove on the road was under the prescribed speed limit. There was none that crossed the speed limit.

Out of curiosity, the police officer decided to find the reason for the same.

He walked for a while and saw a 12 years old boy standing near a huge sign board ‘ RADAR TRAP AHEAD ’.

The police officer wanted to move further to find out what exactly happened!

« Back to MenuNext Story: The Intelligent Artist »