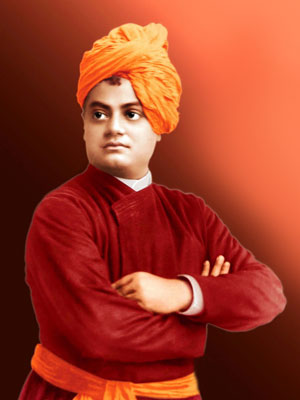 Swami Vivekananda, was an Indian, Hindu philosopher, who is widely regarded as the founder of Ramakrishna Mission. He introduced the Vedanta’s and the values of Yoga to America and Europe. He established Hinduism as a major world religion in the 19th century. In 1893, he introduced Hinduism at the Parliament of the World's Religions in Chicago. His famous and awe-inspiring speech there began with the line "Sisters and Brothers of America,” is still talked about, even today.

From an early age, Narendranath Datta was an expert in meditation and could easily enter the state of Samadhi. One fine day, he had the vision of Buddha, during his meditation, which perhaps motivated him further to take up the spiritual path. In his childhood. He was deeply fascinated by monks and ascetics. Even at a young age, he displayed extraordinary leadership qualities.

Narendranath was a brilliant student. He not only studied literature, science, and philosophy, but also read the holy books of other religions. He did not believe in religion, but in one supreme being who was universal and formless. He believed the most effective form of worship was service to humanity.

Upon graduating from College, Narendranath visited the Brahmo Samaj and later came in contact with Sri Ramakrishna. He was inspired by Sri Ramakrishna and his teachings. After the death of his guru, Narendranath left his home, accepted asceticism, and began to live with his monk-brothers in the Boranagar Monastery.

Soon Narendranath set out to travel across India as a brahmachari under the name Swami Bibidishananda. He lived on alms and was a celibate till his death. In his efforts to attain enlightenment, he reached Kanyakumari (Cape Comorin) in Tamil Nadu. Here, he sat on a rock in meditation continuously for three days; today the place is a popular tourist attraction and is called Vivekananda Rock.

It is here; while meditating, Narendranath obtained the famous Vision of One India. This vision is also called Kanyakumari resolve. According to this resolve, Swami Vivekananda realized that it was useless to preach religion to the poverty-stricken and hungry people. Therefore, encouraging people to be self-sufficient would eventually lead to spiritual awakening. For his efforts in the spiritual enlightenment of the Indian masses, he established the Sree Ramakrishna Mission and Sree Ramakrishna Math.

As he traveled across the globe, he felt ashamed and sad at the collapsing scenario of India and called the nation a lunatic asylum. India was gripped in the bondage of caste system, apartheid, superstitions and vanity. Social oppression was hindering the progress of the nation. Narendranath encouraged Indians to leave their narrow thinking and accept the broad and tolerant perspective of the Western world.

He made history when he delivered a speech on 31 May 1893 at” Parliament of the world's religions” event in Chicago. He introduced Hinduism and the Indian philosophies of Yoga and Vedanta. Gradually, his philosophies became popular all over the world.

An ardent devotee of Narendranath Datta, Maharaja of Khetri, Ajit Singh, in 1892, crowned him with the title Swami Vivekananda. Swami Vivekananda gained immense popularity after delivering many lectures across Europe and America. He returned to India and established the Ramakrishna Maths and Mission in 1897 that teaches Veda, Yoga, Philosophy, and Sanskrit to pupils. On March 19, 1899, he also established the Advaita Ashrama in Mayavati, near Almora. The Ashram was a branch of the Ramakrishna Math. He composed the popular worship song, Khandana Bhava Bandhana. Swami Vivekananda had a highly inspiring approach and vision for India.

On 4 July 1902, Swami Vivekananda died in his room at Belur Math, while meditating.

Swami Vivekananda was India's spiritual ambassador and a saint. In his memory, the nation celebrates his birth anniversary as the National Youth Day.

« Back to MenuNext: Vincent Van Gogh »